“On the day you understand your loneliness, you will respond to my painting.”
Witold-K

Painter, sculptor, designer, architect, university lecturer and political activist… this, too is Witold-K. He who originally majored in engineering and architecture, and graduated from the Academy of Fine Arts in Warsaw. Witold designed buildings and pavilions at international fairs, executed anodized aluminum sculptures, ceramics, stained glass, illustrated books, and designed posters, book and record covers. His over 40 one-man art exhibitions have appeared in major cities throughout Europe and the United States, and his works are in public and private collections throughout the world.

“…For Witold-K is not just an artist but a truly great artist… I say it because in each of his paintings he demonstrates his absolute mastery of every element of the art of painting.”
John Hamilton, Santa Fe (New Mexican)

“…striking paintings—a new successful moment of contemporary art, and its author one of the greatest painters of the coming years.”
Phillipe Coloni, Paris (Pariscope)

“A thief. He has stolen the flame of fire from the gods.”
Arthur Rubinstein

an undeniable feeling of presence
and of secret charm.
The mystery of everyday people
painted with love and in the furtive silence
and the obsessive noise of the street.
You follow their progress,
but have only the back view of them,
and like them you will give a back view
to other visitors who will take your place
in front of the paintings;
and other visitors...


The artist spent time on the streets during the Nazi occupation, mixing with professional gangs to survive, and risking his life daily by routinely stealing food, arms and ammunition from German camps. When he was 12 years old, he was caught by Gestapo, beaten severely and left for dead.

He lived in the largest mental hospital in Poland, where his father was psychiatrist and director, surrounded by 3000 patients fighting starvation. His father hid many Jews in the hospital from the Nazis, saved their lives, and the lives of his patients. Through his father’s heroic efforts, no one was sent to Auschwitz. After World War II, Witold’s father became the Vice President of the Polish Red Cross and was personally decorated by King George VI. Witold’s mother, a doctor, painter and writer died when he was months old.

At the age of 25 however, Witold had his own experience with Auschwitz where over 1 million human beings had their lives snuffed out. He was selected in 1959 as the architectural designer and muralist of the Oświęcim Cultural Center. The mural, completed in 1961, stretches across the ceiling (3,672 square feet) and is considered to be one of the largest frescoes in all of Europe.

Cultural Center in the city of Oświęcim. Created over a period of three years (1959−1961) in memory of the victims

Witold-K, Fresco - Cultural Center in the city of Oświęcim

Witold-K, Fresco - Cultural Center in the city of Oświęcim

Mural in the playroom for children at the Cultural Center in Oświęcim (destroyed).


In 1964, with great personal risk, he smuggled the literary works of dissident Russian and Polish writers out of Poland and into the West, for which he paid dearly.

The artist was singularly honored by the prestigious Otis Art Institute of Los Angeles County, with a Retrospective Exhibition in 1973 (25 years of creativity).


He also participated in the New York exhibition Graphics By Masters in 1968, featuring works by Picasso, Chagall, Miro, Braque and Giacometti, and was commissioned to create a series of paintings for the Conoco Oil Company in Houston, and United California Bank in Beverly Hills.


“The principal value of beauty is in the fact we are not able to understand it. We don’t know the meaning of it, but we feel it is beautiful. Obviously not everybody feels. I, on the other hand, do not understand.”
Witold-K


In about 1950, Witold had a vision of “black holes”, and became almost obsessed with the creation of a series of “Black Hole” paintings… before astrophysicists discovered their existence in the universe!


“I am haunted by questions. For me, true art is just one of them. If a painting is only an answer, it is not art; it is just an illustration. Nothing more!”
Witold-K

“I am most enthusiastic to see your first drawing of the proposed monument to explosions. Explosions seem to govern our lives—both emotionally as well as throughout the physical universe. A monument of major proportions is needed to emphasize to the world the governing duality of the explosions that produce the Universe and the explosion of life that produced man.”
Dr. Stirling A. Colgate Los Alamos, NM

The sculpture will be the focal point of the underground meditation monument Witold designed. The monument will symbolize a harmonious union between art and science.


“We are very interested in both the content and the structure of the project which Witold-K has created. Particularly, the idea of underground meditation in the context of 20th century technological development versus the psychological disorientation which is characteristic of modern life.”
James Harithas, Director Contemporary Arts Museum, Houston

In 1992 Witold was commissioned by the Aspen Music Festival to create a painting that would be reproduced as posters and featured on the program cover. 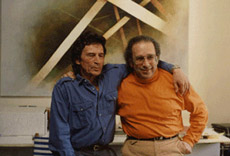 
The very next year the city hosted his exhibit “Warsaw-Paris-Aspen” where his portrait by Picasso was featured, sponsored by Pitkin County Bank.

In 1997 the mayor of Denver proclaimed May 15 as Witold-K Day in the city in honor of his 65th birthday. Same year Witold received Medal of Achievement and Honor from the Republic of Poland.

In 2001 he created the set design for the ballet at Cleo Parker Robinson Theatre in Denver. Choreography by Maureen Breese and music by Richard Cummings. The same year he was commissioned by the University of Colorado and L’Alliance Française to create the set design for the play “Cité Sans Sommeil” by Jean Tardieu.

In 2004 the artist had a one-man show at the Royal Museum Łazieki in Warsaw. Also in 2004 the Colorado Symphony Orchestra commissioned a painting to be reproduced as a poster.

In 2007 Witold became the first and only American and Polish painter to be featured with a one-man retrospective exhibit at the Sotheby’s in Amsterdam with 163 paintings.That same year he was nominated for the Denver Mayor’s Award for Excellence in the Arts by the Denver Office of Cultural Affairs.

50 years after completing his famous mural in Oświęcim (Auschwitz), the American Ambassador to Poland honored Witold in 2011 with a celebration of his accomplishments sponsored by the American Consulate in the city of Cracow. He also had an exhibit at the Cultural Center.

In 2013 he was honored with a one-man show in Cracow National Museum and decorated by the minister of culture in Poland and honored with the Gloria Artis for Cultural Achievement, his second medal.

In 2015 he was chosen by the government of Poland to receive the title of “Outstanding Polishman” in the United States.

Since June 2011 he has written a monthly column for the Życie Kolorado, a monthly newspaper for the Polish communities in Colorado.


“Look at yourself in a painting as you do in a mirror.
Think about your life and forget the painter!”
Witold-K in his lecture to students at Seton Hall University 1971